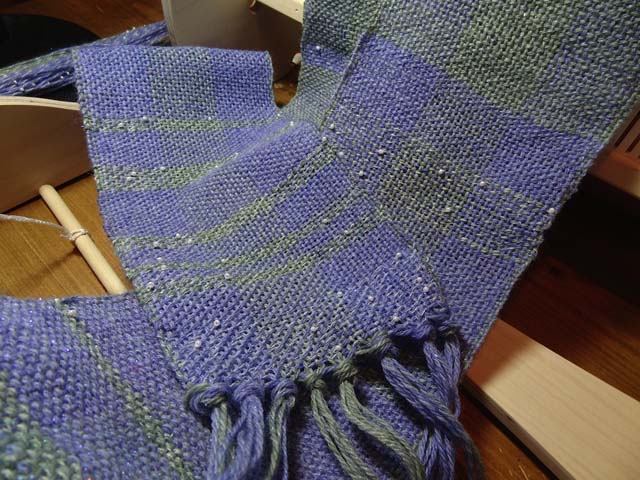 Sea Meets Sky Scarf Pattern for Rigid Heddle designed and woven by Jane Tigar, a brand new weaver! Jane fell in love with weaving while making a small perle cotton table runner during 4 – 2 hour backstrap weaving sessions. She decided to get a Rigid Heddle Loom. Jane called and we talked about what she wanted to weave and we compared the features of the Schacht Cricket Loom and the Schacht Flip Loom. Based on what and where she wanted to weave, she decided upon the Schacht 15 inch Cricket loom. We sent it right out to her along with some of our soft sparkly wool Alpine Meadow Yarns and some Nature Spun Worsted Yarns. Like most of us, she also has a stash of knitting yarns.

She emailed me a photo of her first scarf a couple of days after she got her Cricket Loom. Then photos of her next 3 scarves quickly followed. I was impressed with her eye for color, her creativity and her enthusiasm for the craft of weaving. She named her scarf Sea meets Sky because of the soft blues and greens in the Alpine Meadow Yarns she wove it with. Jane’s pattern is available to print here Sea Meets Sky Scarf Pattern by Jane Tigar.
She did some research on the name she gave her scarf and found something similar in the history of Pamlico County, North Carolina where she lives. Pamlico County was first settled by the Europeans in the early 1700’s. The Pampticoe, a Native American people who lived in what is now called Pamlico County called the area TaTaku which means where the land and the sea meet the sky. The Pamlico County slogan is: Where the land and the sea meet sky.